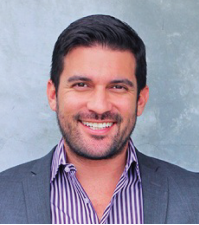 In a letter to members, the Outfest Board of Directors stated: "We are excited to announce that we have selected Mr. Damien S. Navarro to be Outfest’s new Executive Director. Over the last two years, our Board, staff, and stakeholders have been working diligently to develop an expanded vision and strategy that will allow Outfest to be an even more vital and impactful advocate for the LGBTQ+ community. As we move into the implementation of this vision, Damien emerged as exactly the right person to lead us into this future."

Damien was selected from a large and diverse group of candidates following an intensive search. The Board was impressed by his passion and his understanding of the power of storytelling to create real, lasting social change. He has a proven track record as an entrepreneur and marketing/advertising leader.

Damien has a long history in content development and digital media space. Beginning in 1999, he co-founded Earthbound Media Group (EMG), a small production studio that later evolved into one of the fastest-growing digital agencies in California. With EMG, he built a diverse portfolio of national and international advertising, public relations and fundraising campaigns for several Fortune 100 global brands, studios, nonprofits, and publishers. More recently Damien was President of VIMBY, formerly MGM/Mark Burnett Content Studio, where he leveraged the power of brand, cause, and content and helped evolve the company into a next-generation brand entertainment studio.

Damien will be introduced during Outfest Los Angeles and will begin full time at the end of July.