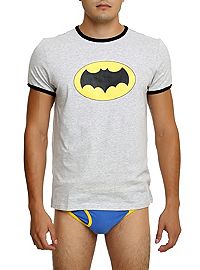 Face it guys, didn't we all want to jump in the sack with Batman or Superman?

If you were an average American little kid during the 1970’s up until the late 1980’s, chances are you wore Underoos from Fruit of the Loom. Basically, Underoos were underwear for kids based on various pop culture characters, everything from Marvel and DC heroes, Star Wars, and even TV shows like The Dukes of Hazzard and Knight Rider. What was so epic about Underoos is that the best ones doubled as costumes for characters like Superman and Wonder Woman, characters who kind of wore their underwear on the outside anyway. Who needed a cheap and probably flammable plastic costume? Not when you could just tie a towel around your neck while wearing your Superman Underoos and -presto-you had yourself an instant Superman costume. Or at least one for running around the house and jumping off the sofa.